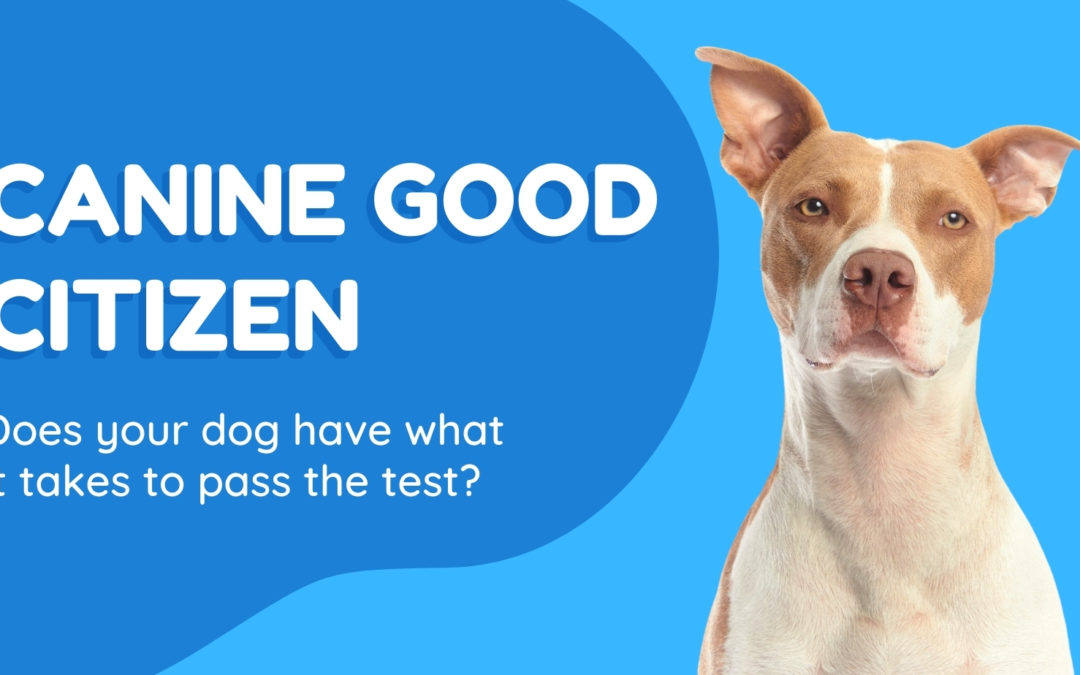 Can Your Dog Pass the Canine Good Citizen Test?

The first time my dog Lucius and I took the Canine Good Citizen Test he passed all test items with flying colors!  Only to be promptly failed by the evaluator immediately after we left the testing ring.  What happened, you ask?

As we stood at the check out table collecting our paperwork a lady and her dog crowded in beside us.  She had an exuberant yellow lab with a predilection for jumping on anyone within leash range.  Her dog had managed to pass his CGC test on a previous occasion.

A low growl caught my attention.  Another growl promptly followed sending vibrations up my own leash.  The lab had growled at my dog first and my dog had responded in kind.  I cued a hasty retreat.  The evaluator had been watching the scene play out and issued an instant disqualification for me and my dog as we had not yet vacated the training venue entirely.  Meanwhile the lab’s owner stood by obliviously trying to keep her dog from mugging other people’s treat pouches.

What Does Passing a CGC Test Mean?

As a pit bull owner I had worked hard to have a well behaved dog in training class.  He was attentive and well focused, most of the time.  It was frustrating that another handler’s inattentiveness impacted us in that manner.  Really though, I only had myself to blame for putting my dog in a situation where he was set up to fail.  It was eye opening that all that work we’d put in in preparation for the CGC test didn’t necessarily mean that he was going to be well behaved outside of the training ring.  So if it didn’t mean that, what did it mean?

Since that day, well over a decade ago, the American Kennel Club’s Canine Good Citizen program has grown and evolved.  The new levels now offered would make it seem that the AKC recognized the original test’s limitations in measuring of a dog’s manners in the real world.  The AKC is an active well known organization with many events across the country.  Some insurances or landlords even require the test in order to accommodate dogs so it’s no surprise that the CGC evaluation is often sought after as a measure of the dog’s safety.

A Test is Just a Test

We  retook the test and once again passed with flying colors.  Based on what I’d learned the previous attempt, this time after class we didn’t linger.  I was inspired!  After volunteering with that training organization for some time I eventually became a CGC evaluator myself.   I participated in evaluations with other organizations as well as conducting tests through my own business.  The lessons from that first failure stuck with me.  What I’ve came to appreciate is that a test, like in highschool or college, is just a test.

A test is just a snapshot of a moment in time.  I realized after my first CGC attempt that I’d spent all my time practicing to pass the test but never put much thought into what we would do outside of the ring.  The training arena is a controlled environment.  It’s easy to limit the amount of distractions.  It gets easier and easier with each visit for a dog to slip into ‘training mode.’

Even highly trained dogs can get swept away by distractions in a new environment.  In the real world we deal with concepts like ‘stress stacking’ where cumulative stressors compound until the straw breaks the camel’s back.

The Real World IS the REAL Test

A test is really just a measure of test taking ability.  Tests are set ups.  They are practiced for and arranged to achieve the desired outcome.  If you only strive to pass the test then that is the only accomplishment you’ll attain.  However, if your goal is fluency in the real world, then you’ll want to practice for that instead.  At that point the certificate of achievement is a nice acknowledgement but it really doesn’t pay homage to the hours of practice and effort you and your dog dedicated to be able to check each skill set off your list.  Fluency requires maintenance.  You don’t ever stop practicing if you want your dog to maintain the skill set.

As a trainer I’ve searched for ways to help people achieve fluency in the real world.  A dog may tolerate certain conditions in testing circumstances but that doesn’t mean your dog enjoys being in those situations.  We all reach our fill at some point.  It’s important for the owner to recognize signs of stress such as yawning or tongue flicking and make adjustments to their handling when appropriate.  How we respond to our dogs in public increases or decreased their capacity for ‘good’ behavior.  Many owners strive toward therapy or service dog training..  If dog passes the CGC that doesn’t necessary mean he’s cut out for the more rigorous interactions that something such as a therapy career requires.

What if We Fail?

Failing a Canine Good Citizen test doesn’t mean you have a bad dog.  Recognizing your dog’s thresholds and limitations and setting them up for success is just as, if not more so, valuable than being able to pass a test.  A far better test of you and your dog’s abilities could be making the decision to avoid certain circumstances like those represented by CGC test items.  Besides, there are far more lessons to learn in a failure so it really isn’t a loss at all.

The nerves invoked by testing scenarios can be similar to pressures faced in the real world.  Learning how to make quick decisions under pressure is valuable.  Failing the test simply means that you or your dog did not perform well in that specific situation on that specific day.  While it could certainly indicate underlying issues it could also just mean that things just didn’t work out at that moment in time.

The Dog Training Take Away

As many group class attendees have learned, putting the time in for 1 hour once a week isn’t going to get you very far.  Training a well behaved dog requires consistent feedback and boundaries almost every moment of every day.  Particularly until good habits are established.  If you want your dog to behave well in public you must practice consistently in public settings.  You must also recognize when you’re asking too much of your dog so that you can scale back appropriately.  Those who put the mileage in are likely to pass the Canine Good Citizen test with little issue.

Because of it’s continued popularity and similarity to many therapy dog organization certifications the Canine Good Citizen continues to be a highly desired test.  Canine Solutions strives to give clients the variety of services to meet their training goals, of which the CGC test is one.  If you are interesting in participating in our upcoming Canine Good Citizen Prep Class and Test email us today!